A Brief Open Letter to the Woman at the Dog Park

Is your name Starlight? Or maybe Rainbow-serenity? Let’s go with Starlight. I hope that’s okay, Starlight. When I was little I’m pretty sure I dreamed of your free-spirited ease of being and penned a song about you entitled, “Why can’t the world be free?” More than anything, I think the song scared my dad into fearing my future liberal political and social endeavors. I have a few confessions, Starlight, and since you’ve shared with me that you’re moving to “the new high rises downtown” I feel like it’s a good time to get them out in the open.

First, my fiance saw your boobs. I know! I know! Do you also feel a lot closer now? I do. I feel great getting this off my chest, (see what I did there?!?). He didn’t comment much about them which inevitably means they were impressive and I can see that, Starlight. Like, literally I can see the outline of your breasts because you’re never wearing a bra — the nipples too. And that’s okay! Bras are just a cagey nuisance of underwire and female suppression. And you know, if only all of us women could be so open as to share our boobs with the world via our patios maybe, just maybe we’d be a freer place. 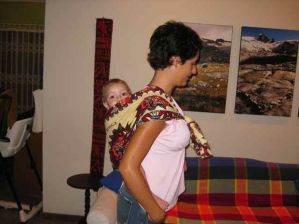 I just found out this is called “African Style” and I’m left wondering… why does everyone hate Americans so much?

When did you have your adorable baby, Starlight, and do you also think he has the head of Rob Reiner? Like, not in a bad way, he just has the biggest baby head I’ve ever seen. And this concerns me, as the level of shape your body is in would put Cosmopolitan’s “How to lose (insert area of body that any women has ever complained about)…” section out of business.  Is it because you are constantly carrying that nugget on your back using a tie-dyed sheet and a few overhand knots? Wait, did you secretly grow up in Laguna Beach, CA where your father taught you to sail and do things like tie knots properly? Now that I think of it, your red hair did not seem all that natural (because women born there can only be blonde. And rich. You know, because, Laguna Beach). Were you friends with LC? How about her and that Kohl’s deal, amiright? I’m sure you’re happy for her. Because, you know, karma and good vibes.

I have to admit that I’ve often thought about the nature of your family, like in the way that I could’ve sworn your baby daddy was a homosexual male. And it’s obviously none of my business, except for the times he yells “hi!” when I’m out on my balcony which is an obvious open invitation to examine your personal lives. It’s just, his hair is so perfectly unkempt and also that time I swore he was holding hands with a man. It’s confusing! Are you guys pulling an The Object of My Affection starring late 90s Jen Aniston and Paul Rudd? Because who wouldn’t want to raise her child with gay Paul Rudd? If so, no judgment here!

Mostly, I just want you to know I’m thinking of you and how much you look like Jenny Lewis and how jealous that makes me. Oh, and I also wanted to know if all of your friends also look like a combination of the Lost Boys from Hook and members of an up-and-coming indie band or is that just you? And also sure, your baby is a pretty fucking loud crier (But still totz adorbz!).

Apparently, the Lost Boys may have actually formed an Indie band already…