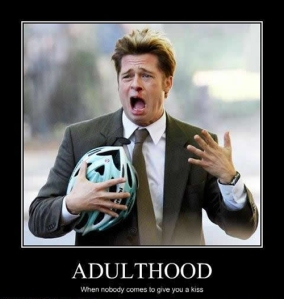 Being an adult is assembling office chairs with an Allen wrench until your thumb grows an additional layer of old man skin. It’s the sinking realization that rush hour traffic at 6:30 PM is more intense and resentful  than rush hour traffic at 5:30 PM — the man in a Men’s Warehouse suit cutting you off is more intentionally bitter about the life decisions that brought him to that very moment, being stuck in traffic with you as you suck on your e-cig, playing that Pink song “Give me Just One Reason” with the lead singer from The Format over and over again because Matti will murder you in your sleep if he hears it one more time at home. This is being an adult.

It’s walking into a bar and not immediately crying when you realize you’re the oldest one there. It’s putting on your big girl panties and apologizing to that one person you work with that you have dreams about publicly humiliating even though it should really be the other way around. It’s figuring out the best way to outsmart your insurance so you can pay the lowest possible deductible when you go in for a colonoscopy. It’s coming to terms with having to get a colonoscopy at age 24. It’s accepting the fact that you’re going to hear a lot of people poop in the bathroom at work because not everyone cares enough to find an underused bathroom on the 2nd floor to take care of business in. And it’s learning to appreciate those casual poopers with enough empathy to give a few courtesy flushes as you innocently pee in the stall next door because in the end, we’re all in this together. 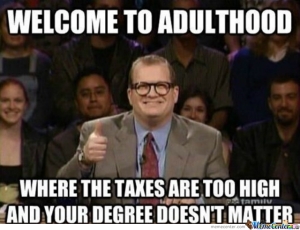 Most of all, however, being an adult is realizing that most things aren’t going to go your way. And you’re just going to have to deal with it. And when someone at work speaks to you like that bitch second grade teacher you still have nightmares about you’re going to have to cry in that same stall you go to for strictly poop business because crying in public at work is unprofessional and you’re not a baby. And when you come home to your apartment to find that your prince of a puppy has had a poop party while you were gone, well you’re also going to have to deal with that (but crying is okay, because you’re home and you’re only human after all). And yeah, maybe you didn’t realize that being an adult would require so much thinking about poop.

Like when you have intentions of seeing people over the weekend outside the confines of the barely functioning heat box you call your computer because your trying this new thing where you “break routine” and do things you normally only watch people do on television, like go to work Happy Hours and take a shower more than twice a week.

But then adulthood pays you a visit by asking you, “were those two pieces of pizza you siphened from Matti tiny adorable bite by tiny adorable bite really worth it?” And of course they weren’t because now your writhing on the couch like your trying out for the lead in the Exorcist. Friday then turns in to “remind Aly why being adult is more than casually going to drinks with friends” day. And this of course, only happens when you have grand plans to meet and exchange hilarious stories with the amazing people behind the blogs you read at an awesome event called Blogger Interactive. And you’re going to cry on the couch about it as Matti asks, “are you sure you don’t want to go to the hospital because your pain tolerance really scares me sometimes?” 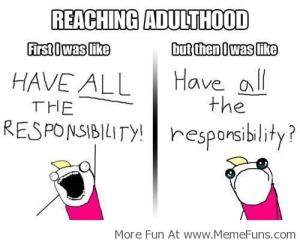 Being an adult is realizing that time is not going to magically multiply, allowing you to complete the tasks that are actually important to you, like say, writing posts for your blog. And you’re actually in charge of your own life now. Which means choosing to buy a half gallon of coconut milk cookie dough ice cream is ALL on YOU and you have to deal with the repercussions. It’s appreciating the small things like when you finally get health insurance and your doctor uses the phrase “stupid anemic.” It’s realizing that not every single thing you do is going to be flawlessly brilliant and witty and that you still need to try to be a successful, compassionate human being. People will forgive you for your imperfections, mainly because they’re too worried about how bad they will look judging you.

Being an adult is finally accepting yourself for the flawed but hilarious person you are because at this point, what choice do you have?

Tell me about it, stud Cancel reply