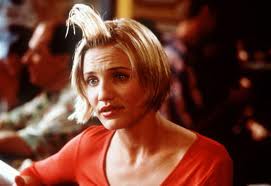 Anna has witnessed by bangs do the exact same thing (minus the man protein).

It’s as simple as when you wake up, go pee and then jump back in bed and spoon with your dog instead of staying awake. You pray you can get your shit together by 10:30 because at the moment, your right arm is entirely asleep and your hair is an enviable remake of Cameron Diaz’s in Something About Mary. Ughhh but there’s so many more episodes of Hell’s Kitchen to mindlessly stare at and having the queen bed to yourself for a few hours in the morning is just, everything.

This guilty, self-indulgent feeling is the mark of some serious karma coming your way. Feel bad about spending three hours of your life watching The Bachelorette? Of course you do. This week’s karma special: customer service.

“Where has she been the last few days?” is the question none of you are asking yourself right now and yet, I’m going to tell you. It all started with Groupon. Moving closer to my goal of a fulfilling career where I wear pencil skirts and Chiffon tops, I decided it was time to purchase the proper self styling tools — namely, a hair straightener. When I was an adorable four year-old camera leech, I had hair like Shirley Temple in the best way possible — all curls, no frizz. As an adult, my hair is more like Sarah Jessica Parker’s in Square Pegs.

I’m happy that my life decisions have led me to a place where this split image can exist.

Like most services you pay for, you expect a package to arrive to its intended destination, especially when Groupon has already told you it’s been delivered. But somewhere in between pissing off everyone that works in my apartment’s office, getting to know Carol the USPS lady better than i’d like, Jim, also from USPS telling me I need to “open up an investigation,” and then giving me a non-working number to contact,  I started to feel like I wasn’t going to get my package but that I might finally get to engage in a revenge plot fantasy. So I did what any white girl with a dwindling savings account and business women aspirations would do: go buy a cheap straightener at Target.

Flash forward a bit to me impetuously trying to finish a post on Friday before Matti gets home from work. WordPress has always been there for me, how could it now be cutting out of connectivity, unable to load pictures, and unable to load the customer support page? The internet ganged up with karma and was sticking it’s tongue at me the only way the internet knows how: by choosing which websites it will functionally load like a security guard at the airport choosing which person to search.  That’s totally fine — I didn’t spend five hours on this post already or anything and I love dealing with technical issues more than most things… said nobody, ever.

Even this cute little girl hates you, Time Warner Cable

I received an email (rather quickly) from my good friend WordPress telling me people with Time Warner Cable were having similar issues. Is Time Warner Cable a real company or is a big consumer April Fools joke? When I called up the big guys at TWC, aka Tim with customer support whose name was definitely not Tim, they told me that wireless internet is very “finicky” and do I have an ethernet hook up. Apparently TWC thinks 2001: A Space Odyssey is still a glimpse into the future because they are stuck in a pre 2000 dial-up, plug in internet world.

“You know what Tim? It’s weird but when I bought wireless internet I thought it meant that I would be provided with a working wireless connection. I must’ve missed that sales pitch when I chose your service: Our wireless is finicky but we still love your money! Should I assume every service you provide is “finicky” or is that just with the new and upcoming wireless technology?”

Time Warner Cable is so funny because it’s as if they don’t know how badly they suck. You’d think after losing CBS they’d be a little more self-aware. Tim told me a representative would be by in a few days to put a bandaid on my internet.

Cut to me on the couch watching Gordon Ramsey tell his contestants to piss off as I shove an almond milk ice cream bar down my gullet and contemplate the amount of ways you can cook beef cheeks.

“So I guess I’m not gonna go to the gym tonight,” I said out loud to myself, looking at Matti, as I grab and squeeze my tummy fat like a stress ball. Three hours earlier I told Matti he wasn’t allowed to not let me go to the gym that night — I think my overuse of negatives may have confused him into inaction. I GUESS I should also take responsibility for my own fitness…

So I did. The next day I went to the gym and gleefully realized they have the machines with the TVs on them. After running on the treadmill for a mile, to the surprise of myself and everyone that has ever known me, I went to the elliptical and realized the ear plug jack worked! Karma be damned — I was about to burn off the 300 calories of pure olive oil I consumed that day while watching the Kardashian/Jenners pretend to be a family on a farcically posh Greece vacation. While I subconsciously tried to out-elliptical the girl next to me as we both laughed out loud individually at Kendall’s spoiled rich girl tantrum, I had an epiphany.

I always hated running and I hated every person that ever had the audacity to claim they loved doing it. I’m sorry, I don’t believe you and if I wanted to clear my head I’d take a bath. But for first time in my life I had muscles in my stomach that were almost visible and I wasn’t going to let that change! I realized I didn’t need to have a romantic parisian love affair with running or exercising to enjoy it — I just had to be watching trashy reality television (or Shark Week). I knew I would be back at the gym when I got offended by the girl next to me not wiping down her machine after she smeared her girl sweat all over the machine.

I stopped in the mailroom on my way out of the gym for no real reason besides I wanted the lady inside to see how exhausted I looked drenched in sweat to solidify my gym experience and as I opened the box I saw a slip with the words I had been waiting two weeks to see: You have a package in the office.

7 responses to “Customer Service Karma and Becoming a “Gym Person””

Tell me about it, stud Cancel reply